My mind feels like sludge. I’ve lost several crucial brain cells in the last two hours. In order to get through it, I promise myself a brief break to the outside world after this episode as my reward. I must press on.

Thankfully, this episode opens up to Marco shirtless.

Down in Song China, the prime minister has seemed to establish power. I wonder what kind of household he and the royal concubine grew up in given both of them fight like ninjas. They must have had one hell of a Christmas dinner growing up.

The Royal Concubine has been sent off to the Khan’s court, where she must establish herself again as another Royal Concubine. The girls are all try out for a chance on American Idol while the Empress masquerades as Simon Cowell. She is not selected, much to her chagrin.

Marco, in the meanwhile, stalks the Blue Princess, who has a fondness for hanging *gasp* blue ribbons near that darn tree. Is that seriously the only tree in Mongolia?

The Khan is having remorse about killing his brother, Ariq. He is counseled by many that the death was necessary. That’s fine; he’ll stay at home moping while Marco accompanies Jingim to a function with the Khan’s cousin. There, the Hot Italian roams the camp and catches the eye of a chick. Blue Princess rival, is that you? They play a game of Twister. 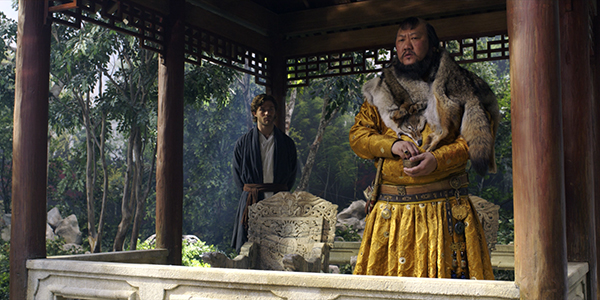 “It is in our nature to seek our brother’s possessions and be willing to destroy to obtain them.” (Netflix)

After the party, things aren’t so great in the Khan household. Jingim is like the worst petulant, third-culture kid evar. They should have sent him to Mongolian School while he was taking Chinese Studies 101. Things are amplified when the Khan takes out his anger on a bystander to prove a point to Marco: don’t you lie to me. Man, this guy can move for someone who has gout and can’t even make it to a dinner party.

Concubine finds a way to be a Royal Concubine. Marco finds an unwelcome surprise.